The original, independent guide to Lisbon

The resort town of Costa da Caparica is a popular day trip from Lisbon as the beach offers a continuous 30km stretch of golden sands with waves that are ideal for surfing. The Costa Da Caparica beaches make for a suitable alternative beach to the Cascais/Estoril coastline and Caparica is connected to Lisbon by a regular and inexpensive public transport network. This guide will provide details on how to travel from Lisbon to Costa Da Caparica by public transport. 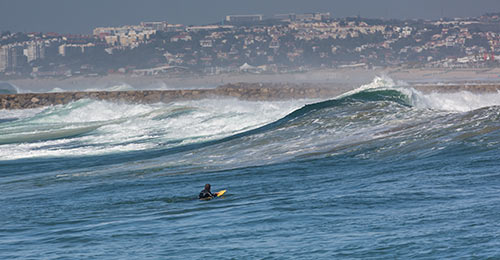 The Costa da Caparica is famous for its huge surfing waves

The town of Costa da Caparica is 10km south west of central Lisbon and the route crosses the Tejo estuary via the Ponte de Abril suspension bridge. This short distance means that the northern edge of the coastline is crowded during the summer months but for quieter beaches catch the mini train which follows the beach front for 10km.

Both routes cost the same, the ferry route may be more convenient for tourists who are based in downtown Lisbon but the direct bus service does not require a connection. The following sections explain in detail the two different routes.

A single ticket costs €3.20 and is purchased from the driver, TST do not use the Viva Viagem card system. The journey takes between 40-60 minutes depending on the traffic in Lisbon and terminates at Costa da Caparica bus station. 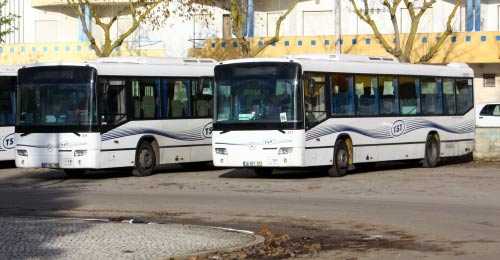 The main problem with the 161 direct bus service is the departure location, the Praca do Areeiro. The buses do not depart from a regular bus station but from a series of bus stops spaced around the busy convergence of many avenues. It can be tricky to clearly identify the exact departure location of the 161 TST bus, if in doubt ask for the bus to Coast da Caparica. Praca do Areeiro is on the green metro line and is served by the Areeiro metro station. It is sometime easier to travel to Costa da Caparica by the ferry route and returning via the direct bus.

The bus station in Coast da Caparica is 500m from the beach and is 1km south of the main resort centre. The bus station is very easy to navigate and all services are clearly displayed above the bus stands, at beach stop there is a clear timetable.

The ferry departs from the Cais do Sodre ferry terminal which is part of the larger Cais do Sodre train station. Cais do Sodre is the final station on the green metro line and is the terminus for trains to Cascais and Estoril. Ferry tickets cost €1.25 and tickets are charged to the Viva Viagem reusable public transport ticket. The ferry terminal on the southern bank of the Rio Tejo is Cacilhas. This is a major transport hub with ferry, metro and bus services departing from here.

The express bus service from Cacilhas to Costa da Caparica is the TST 135 bus service while the slower route is the TST 124. There are 1-2 departures per hour for the 135 service and 3-4 departures for the 124 route. The 135 would always be the preferred option only taking 20 minutes compared to the 40 minutes of the slower service. The bus ticket is €2.40 and is purchased from the driver.

An alternative beach destination on the Costa de Caparica coastline is the small village of Fonte da Telha. This beach and village is situated at the final stop of the mini train. The number 127 bus provides a direct bus service from Cacilhas bus station to Fonte da Telha with hourly departures.

If you find yourself waiting at Cacilhas bus station take a short trip to the magnificent Fernando II Gloria, Portugal’s last sail powered ship which is located just south of the bus station. The massive ship has been beautiful restored and is open Tuesday-Friday 10am-5pm and the entrance fee is €4.00.

Cascais Introduction
Things to See and Do
1 Week In Cascais

Sesimbra Intro
Things to do and See
Sesimbra Beaches